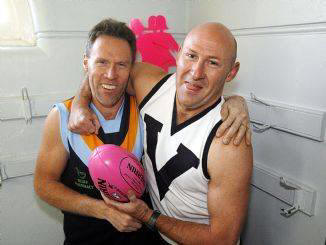 The August 31 event, which will be held at the Hampton Rovers Football Club (Boss James Reserve – corner David St and Bluff Rd, Hampton), will raise money for the two schools and for breast cancer research. As well as the football match, there will be auctions and raffles.

?We all know someone … who has been affected by breast cancer and this event gets the dads together to play a game of footy, raise some money for our kids schools and support a great charity,? Mr Grant said.

Money raised will go to educational and infrastructure programs at the schools and to the Breast Cancer Network Australia.

The match kicks off at 1pm on Sunday, August 31. A huge crowd is expected, make you get along and support this big day. The Hampton Rovers Bar and Canteen will be open throughout the day.