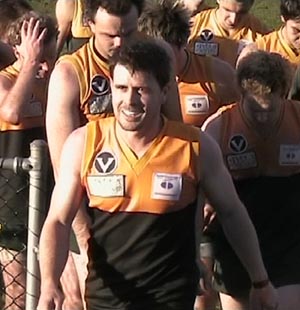 In Matthew McKellars 300th VAFA game, the Hampton Rovers put in a spirited performance but were unable to overcome the Monash Blues who triumphed by 25 points at Boss James Reserve on Saturday.

The former club and premiership captain for the Rovers was given a special pre-game address by 1995 premiership winning coach Don Scarlett prior to the game, on the same day the club was celebrating the 10-year anniversary of the drought-breaking senior premiership.

Monash Blues kicked with the aid of a strong wind in the opening term kicking towards the end and started the game well posting three early goals. The Rovers finished the quarter strongly responding with three of their own. Another six-pointed to Monash saw them lead the home side by seven points at the first break.

The depleted Rovers outfit endeavoured to make the most of the breeze in the second quarter however could manage just the three goals while Monash posted five through the big sticks. After the opening half, 15 points separated the two sides.

The temperature continued to fall as the day grew older, however the Rovers were looking to lift their game and make it consecutive wins with a strong showing in the premiership quarter.

The Monash Blues stepped up a gear and pilled on six goals while the green and golds could manage just the one. While down by 48 points at the final break, a win wasn?t out of the question considering the Rovers have had bigger quarters in 2005, not to mention the advantage of the strong wind.

Rovers coach Brett McIllwraith pleaded with his side to finish the game in a positive manner by at least winning the quarter and showing the 1995 premiership players in the crowd theres still some heart out on the field.

To their credit, the Rovers put in an improved performance in the last, however missed opportunities restricted it to just the three goals while six behinds were scored. Monash were kept goalless and the final siren blew resulting in a 25 point victory to the students.

Monash continue to be a bogie side for the Hampton Rovers, but they?ll be looking to reverse the trend in C Section in 2006, with both teams well clear of the drop zone.

Anthony Browne put in another strong performance for the Rovers with Jason Zampaglione and Nick Corcoran also having a good showing. Browne led up front with four majors while Adam Power was the other multiple with two.

Next week the Rovers face a tough assignment in the second-last game of the season as they take on Blacks at Melbourne University Main Oval.

The Reserves also suffered a defeat on Saturday while the Under 19s had a strong 37 point victory over Old Haileybury under lights at on Friday night. Chris Gleeson dominated up front booting 8 goals while Daniel Zampaglione was best on ground for the Rovers.