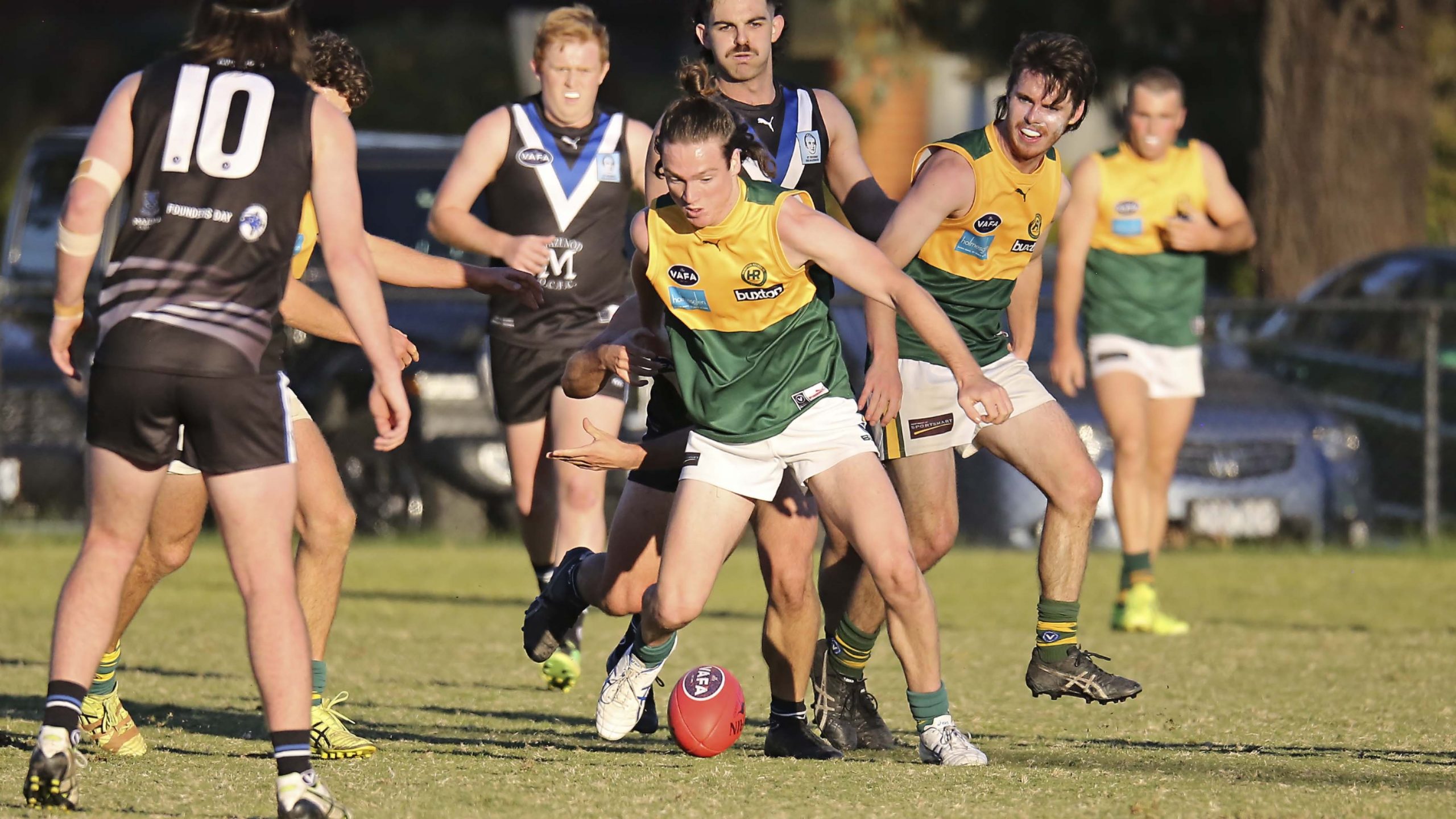 A beautiful day for footy spoiled by a disappointing showing by the Rovers against an opposition that was switched on and ready to play.

From the outset, even kicking with the wind, the Rovers let Mazenod in for 6 goals straight.  Still, we were in with a chance, but poor kicking was the other problem and while we booted 3.6 for the quarter, two of those goals were captain’s goals where Carnovale somehow willed himself to grab two strong marks within a couple of minutes and kicked accurately.

The Nodders were clearly taller than us, and with their tall ruckman, you would have thought that they would have clearly won the taps.  Not to be, Benji until injured just before half time held sway in the ruck contests but it was their other mids that kept driving the ball forward. This led to increasing pressure on our backs who just seemed to fumble, miss the handball or miskick at the critical time.

Mazenod had the wind in the second quarter. It had built up a bit and they took advantage of it. Four goals and only a couple of behinds showed that they were in charge.  We really didn’t trouble the scorer in the second quarter and really the ball rarely went into our forward line and when it did, the delivery was poor.  Jackson Manning was continuing his good form and now with a couple of games under his belt, he is looking the goods.  Cam Morris, forced to do more of the rucking with Benji injured, was trying hard but the body was taking a battering against bigger opponents.  Dillon Melnjak was getting into the play and providing much needed linkage between the back and forward line.  Joel Melnjak and Harry DeWolf on the last line of defence were battling hard but the speed and accuracy of the Nodders forward thrusts were causing problems.

At the main break, the Rovers were 36 points down and by halfway through the third, the opposition had increased their lead to just over 50 points before we finally started to get our act together.  A 4-goal 15 minutes burst in the third quarter reduced the margin, but the 8 behinds was going to make an upset unlikely.  Carnovale, playing a role up forward and on the ball, kicked his third, Joel Melnjak moved into the ruck as a result of a Cam Morris injury and he was battling it out with the taller Nodders ruckman, and Dillon Melnjak, having ditched the helmet seemed to gain a new lease of life and was doing damage.  Scotty Ebbott and Ant Folino were running hard, but you could see how damaging the opposition’s accurate kicking in the first half had been.

When Sam Bradford kicked his third a couple of minutes into the last quarter, you could see the boys lift.  They had repeated entries into the forward 50 but were rarely rewarded with a score.  Chris Perkins and Jackson Manning were running hard on the wings, our mids had lifted and Mazenod had stopped, but we just couldn’t take advantage of the control we had and while we peppered the inside 50, we just didn’t score.  Our lighter framed forwards received no assistance from the umps all day.  No penalties were paid our way against the opposition backs for the treatment off the ball, even when obvious.  On the other hand, one of the few forward thrusts by Mazenod was rewarded with a dubious deliberate out of bounds decision, paid directly in front of the loud Mazenod supporters. It resulted in their only goal for the quarter.

The Rovers fought back hard in the last quarter, against the wind, and with just a little luck going our way at critical times, the result could have easily swung our way.  Anyway, we’re hanging on to fourth spot on the ladder by a whisker and next up, we face Marcellin at the Boss in what is a must win game.

In other results, the Reserves also went down to Mazenod, but it was better news at Boss James Reserve, with the Thirds thrashing Old Brighton and the Under 19s proving too strong for St Kevins. Match reports to follow.

Book in now for this Saturday’s Home Game Luncheon with the Rovers hosting Marcellin at the Boss – click here for details and to book!