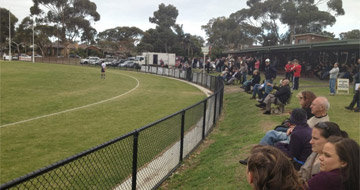 Following their first loss of 2013, the Hampton Rovers return to Boss James Reserve on Saturday to host Old Mentonians in whats a big day for the club.

The Rovers, who are still three games clear at the top, will be looking to get back on the winners list against the Panthers. The Boss, which is still in good condition despite the recent weather, should allow the Rovers to play football, which wasnt the case at Williamstown last week. Last time they met, it was Hampton finishing strong to win by 53 points.

Hampton has five changes for the round 14 clash  three regulars return, Jack Sperring plays his first senior game of the year and Nick Taylor makes his senior debut.

Get along and show your support in whats the third-last home game of the 2013 season. The seniors commence at 2pm with the Reserves (who were defeated in the matchup earlier in the year) at 11:40am. Live scores are available on the Rovers website and via Twitter.

Prior to the game, our 2013 Ovarian Cancer Luncheon is being held with special guest speaker Nicole Livingstone. It is close to sold-out but limited spots may remain, please get in touch with Jenny Voss to book  click here for all the details.

From 7pm at the Boss, its the final major senior function of the year with our $1,000 Draw & Auction Night. Everyone is welcome along for what will be a great night and important fundraiser for the club. If you are unable to make it, then please purchase a ticket for the draw  click here for all the details.

Also on Saturday, the Thirds take on Emmaus St Leos away at Bennettswood Sports Ground (Deakin University, Burwood) at 9:20am in whats the second-last game of the season. Spots are available so if youre interested in a game, please contact coach Seb Wright on 0424 401 850.

The Under 19s also take on Old Mentonians, but at the Mentone Grammar Playing Fields in Keysborough, commencing at 2:00pm.