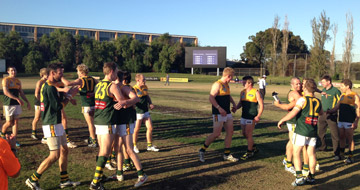 A dominant but inaccurate Hampton Rovers side came from behind to defeat Prahran Assumption by five points in a classic win at Toorak Park on Saturday.

Hampton had 31 scoring shots to Prahrans 16 but it was the home sides accuracy that had them in the lead for all but the final three minutes of the game. In fact, they remarkably didnt kick a behind until mid-way through the third term. Up until that point, they had kicked 12 goals straight and led by as much as 27 points during the second quarter.

The Rovers stuck to their game plan as instructed by senior coach Guy Martyn and it paid dividends in the end. Sending Ed Turner forward late in the game proved a master stroke, kicking three of the final four goals, including a running goal to give the Rovers the lead. The skipper Leigh Fletcher also kicked an inspirational goal late in the piece, dodging the opposition and slotting one from the 50 metre arc.

It was perfect sunny conditions at Toorak Park and it was the Rovers first visit to the former VFA venue since 2007. Hampton had just the one forced change with Jason Zampaglione coming in for Anton Duddy.

A two-goal wind favoured the city end which Prahran had the advantage of in the opening term. They led by eight points at the first break and 16 at half time. However they managed just three goals three in the second half including just two behinds in the final term.

The final quarter was predominantly played at the Rovers end as they controlled the play but initially failed to convert. After taking a one goal lead following Turners major, it was a tense final couple of minutes with Prahran pushing forward on a couple of occasions.

The Rovers back six were solid and stood tall. Prahran missed a set-shot, reducing the margin to five points, before the final siren blew, much to the delight of the Rovers players and supporters, who travelled in numbers. It was a gutsy performance by the boys to grind out a result when they werent playing their best football.

Josh Schmitz went in hard all day and was best on for the Rovers. Jesse Lovig was strong around the ground while Josh Verlin took a number of strong marks and had a solid game.

The Rovers find themselves third on the ladder as one of three unbeaten teams. The other two are Old Mentonians and next weeks opposition, Bulleen Templestowe, who Hampton plays away.

In the earlier game, it was a similar story for the Reserves. It was a low scoring affair and the Rovers found themselves down by 18 points at half time. However Prahran managed just one goal in the second half as the Rovers kicked five goals six to win by ten points. The win was sealed by a superb Jason McCoy goal from a set-shot, on the arc right up against the boundary. The win also puts the Ressies in third spot on the ladder. View full report >

Both the Thirds and Under 19s went down at Boss James Reserve. Emmaus St Leos proved too strong for the Thirds. Chris Rigney was best while Jason Laver kicked two goals. Ormond defeated the U19s with Tim and Cambell Jones best and Matt Care kicking a couple.

SHOW YOUR SUPPORT IN 2013! Purchase a club membership | click here >