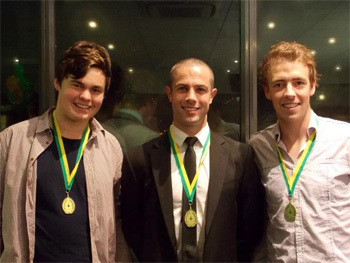 While the Rovers had struggled on-field in 2012, off-field had been a different story and Friday night was further proof with 130 people in attendance at the Presentation Night held at Sandy by the Bay.

It was a dominant display by Leigh for the Rovers throughout the season and this was reflected in the vote count, finishing on a massive 175 votes  a staggering 115 votes ahead of runner-up Jesse Donald. While not known for sure, both the total and margin is thought to be a record.

Leigh was presented the Bob Cave Medal by former captain and four-time winner Anthony Browne. In his speech, Anthony mentioned there had been four previous Hampton Rovers players to win the senior best & fairest on four occasions with the others being Ken Trinnick and Doug Arnold.

The other senior awards were won by Ed Turner, Matthew Innes and Adam Power.

In the Reserves, the Dom Devola Medal was won by Liam Woodland in what was also a big margin over runner-up Mark Short. While in the Under 19s, James Massey won the McGregor Medal with runner-up Nick Taylor.

Leigh Fletcher was named best clubman for 2012 following his strong loyalty to the club and support around the club this year, including joining the senior committee. Leigh is sure to feature prominently in the resurgence of the club in 2013. Leigh gave an inspirational speech which had the attention of everyone in the room.

Two Life Memberships were awarded on the night with Cameron Voss and Denis Flynn named as the newest additions to the list.

The night was capped off by President-elect Matthew Gray outlining bold and exciting plans for the 2013 season  a new era, new beginning and return to success.

Photos from the night are available on Hampton Rovers Facebook >>