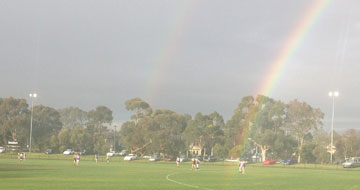 Hampton Rovers went down to Mazenod by 48 points on Saturday at Boss James Reserve.

The Rovers had five changes going into the round 13 clash and were looking for a much improved performance from the 173-point mauling back in round six at Central Reserve. It was wet conditions at Boss James Reserve but the ground held up well. We had sun, an absolute downpour in the third quarter and again in the last term and even a couple of rainbows that appeared to land in the middle of the Boss, according to those who had enjoyed lunch earlier and a few drinks.

Hampton had a dreadful first half, kicking just the two goals and down by 51 points at the main break. The second half was an improvement for the home side but they couldnt make up the deficit, kicking six goals to the visitors five. Final score Hampton Rovers 8.9.57 lost to Mazenod 14.21.105.

The Reserves and Under 19s also suffered defeats on Saturday.

Next Saturday the Rovers travel to Gordon Barnard Reserve to take on Old Camberwell. The U19s take on Beaumaris away.