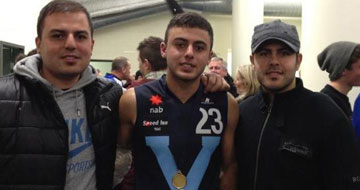 Hampton Rovers junior, Christian Salem, was selected in the Vic Metro side that recently won the 2012 AFL U18 Championships in Melbourne.

The championships are recognised as the breeding ground of future AFL players and it was a great effort by Christian to earn his spot. He now plays for the Sandringham Dragons in the U18 TAC Cup while playing in the 1st XVIII at Brighton Grammar School.

The Hampton Rovers Football Club congratulates Christian on his achievement and wishes him all the best on what surely will be a bright future.