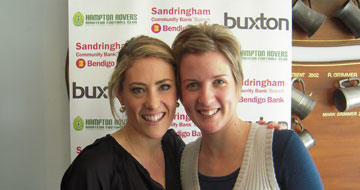 Hampton Rovers FC hosted their annual Breast Cancer Lunch on Saturday as part of AFL Womens Round and it was a huge success with 140 people in attendance.

We went into Saturday advising the lunch had sold-out at 120 people however another 20 or so had missed the list somehow so out rolled more tables and chairs from somewhere and we had a near-record lunch attendance on hand. Of that, approximately three-quarters were women.

We were delighted to have netballers Chelsey Tregear and Elissa MacLeod as guest speakers for the lunch. The best friends play in the ANZ Championship, Chelsey for the Melbourne Vixens and Elissa for the Queensland Firebirds. Unfortunately for Chelsey and the Vixens, they lost the Grand Final on Sunday by three goals however they had an outstanding 2012 season.

Elissa is a breast cancer survivor and she shared her story with everyone: being diagnosed, her brave battle, her rise in the netball ranks and winning the championship with the QLD Firebirds, the strength of family & friends and where she is today. Her story was a great one and her positiveness is an inspiration to all of us.

A raffle was run and donations taken to raise money for the National Breast Cancer Foundation and the club raised a significant amount  somewhere around the $1,000 mark which is a fantastic effort. We thank everyone for their support. The major prize was two nights accommodation at the Manse Boutique Hotel in Daylesford with Heritage Brands packs as runner-up prizes. Everyone in attendance also received gift packs courtesy of Heritage Brands. We thank everyone for their support!

AFL Womens Round recognises the contribution of women to our great game and the Hampton Rovers Football Club is lucky to have so many involved at our great club. The number of women in attendance at Saturdays lunch was testament to this.