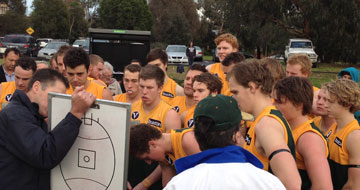 Hampton Rovers travel to Bulleen on Saturday to take on top-of-the-table Marcellin in the final game before the second break of the season. The U19s are at home against Parkdale.

Marcelling have dropped just the two games thus far in 2012, including one last week against Mazenod where they managed only four goals for the day. The Rovers are on the improve but it will be another tough task as they look for their first win of the year.

The Seniors have some seven changes going in to the round 11 clash and the young side is super keen to perform well so all supporters are encouraged to make the trip and get behind the boys. The Seniors get underway at 2:00pm with the Reserves at 11:40am.

Marcellin College is located on Bulleen Road in Bulleen. Upon entering the school, the main oval is located on the left. Melways ref 32 D9. Click here to view a map.

Live updates will be available on Rovers Twitter (@HRAFC) and live scores here.

The Under 19s face Parkdale Vultures at Boss James Reserve commencing at 2:00pm. If youre unable to get out to Bulleen then head down to David Street to see the young(er) Rovers!

The Bar will be open back at the club following the Under 19s game, until late. All players and supporters welcome.