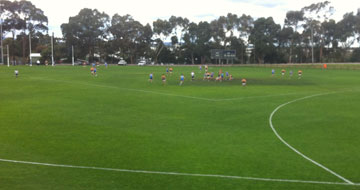 Hampton Rovers travelled to Monash University to take on the Blues on Saturday in Round 2 of the VAFA season and again struggled, going down by 77 points.

The side had some seven changes from the previous week with a mix of youth and experience. Some of that experience came from Steve Anderson who came into the side for his first senior game at the Rovers in eight years and he contributed well, also kicking a goal.

Kicking with the wind first up, the Rovers kicked the opening goal of the game through Nick Taylor, but could only manage one more for the term. While the home sides inaccurate kicking ensured the margin was only seven behinds at the first break.

From there on, it was Monash who took control of the contest, kicking five goals to the Rovers two in the second term to hold a 27 point lead at the main break.

Rory Lynch and Adam Power worked hard all day in defence for the Rovers while Sam Clements, Jack Sperring and Nick Lyall also saw plenty of the ball. Hampton had eight single goal-kickers.

Next week the Rovers make the trip to Banyule for their third consecutive away game before the long awaited return to Boss James Reserve in Round 4.

The Reserves had another tough outing, struggling against the depth of the University side, going down by some margin. Jack Massie kicked two goals and was best on, along with Lachie Wheeler, Liam Woodland, Ben Kezilas and Justin Ng in his first game back. Lee Smith played his 100th club & VAFA game but unfortunately left the ground injured. Liam Woodland also had a milestone, playing his 50th club & VAFA game.

The Under 19s took on top side De La Salle away and  also came away without any points. Best players were Jordan Mayne, Jay Dillon, Campbell Jones, Bryce Pewtress and Nick Shouten.