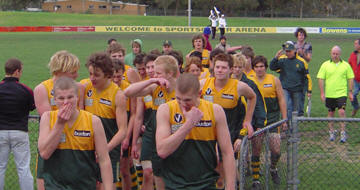 Ajax Washed Away By Rampaging Rovers

What a day!  The action was thick and fast from game time to reflective drinks with the seniors back at the Boss.  The loyal crowd at was complemented by the arrival of the seniors fresh (?) from a night of hard partying after the glorious 4 point win of the previous day which cemented them in B Grade for 2010. Go Rovers!

What a game!  An even first quarter where the coaching panel thought that we had the Ajax boys measure in that they had given us their best shots and weren?t able to pull ahead.  We thought that Jess Lovig couldn?t keep dropping marks, Tommy Youl couldn?t keep fumbling, would get his safe hands back on track, Matty Innes would throw off the shackles of a close checking fullback, Jacko would go in and under and come out with it but it just didn?t happen!  On the other hand Mass was playing his gun opponent so closely that he kept complaining that Mass was tucking his jumper in!   Brent Stevens and Gossey , when they weren?t  incurring the umps wrath, were getting the ball and keeping their opponents on their toes.  A goal up at quarter time was a good result.

The second was probably one of our most frustrating quarters for the year.  We couldn?t pick it up, kick it accurately, mark it consistently or hit  targets and yet despite all of this we were a point up at the main break.  In any event it was clear that Eds time in the seniors was bearing fruit for us as he was in and under and then out on his own delivering to forwards who couldn?t quite get there.  How good was it to see Brendan bouncing  down the far wing again and again?

At the main break the coachs mood was sombre.  He couldn?t believe that we would continue to play so ordinarily for the second half. One goal in the second quarter was the first time that we had scored so poorly for the season.   Even our naturally positive supporters were a little concerned but given the opportunity of catching up with old friends their minds were fully occupied.

The third was a continuation of the second.  A hard and dour affair where goals were hard to score and  we still couldn?t get our teamwork going.   There was concern at one stage that Matt Innes would spoil his perfect record of kicking a goal in each game of the season.  Fortunately, in this quarter he popped one through as did Brent Stevens who kicked two, one of which was a lovely set shot from 45m on the boundary – goal of the day!

At three quarter time we were down by a point and by the time the coach arrived at the huddle the team realized the test they faced and were vocal in expressing their reasons for the predicament.  Quonny quickly took control and had the boys focused on what had to be done in the last 30 minutes.

Woltz to the backline, Jess Lovig to CHF, the Fuzz to the full forward line and things started to happen.  Jess started to hold a few marks and amazingly slot a couple of goals! The Fuzz working with him popped a couple through and then was so dirty when the simple handball didn?t come his way!  Big Jack Sperring kept belting it out of the ruck, Robbie J, in the centre started to have an influence on the game, Baxter kept buzzing around and before we knew it we had kicked a couple clear and the boys were under pressure.  All day Britts and Richy clearly had the measure of their opponents and both at various times showed why they had been so valuable to us all year – their second and third efforts were fantastic!  As the 30th minute approached we had the game under control and it was clear in those dying minutes that the boys could not match our general fitness and continuing attack on the ball.  Seventeen scoring shots to eight after half time tells the tale.

How good was it when that siren sounded?   One down and one to go.  Who would have thought that Mentone would have handed out a hiding to the Bentleigh boys  That game was over 10 minutes into the second quarter – I doubt whether will pull up stumps so early next week.