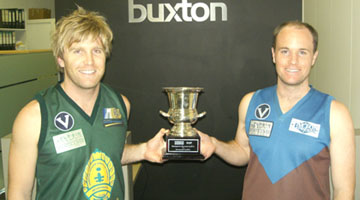 Round 5 of the VAFA marks Rivalry Round as part of Community Football Weekend, celebrating 150 Years of Australian Football.  One of the biggest clashes of the day will take place at Boss James Reserve with Hampton Rovers hosting Ormond.

The Rovers and Ormond are two of the oldest and proudest district clubs in the Amateurs with almost 80 years of history.  Both clubs have been powerhouses of the league at various stages but have struggled in recent times as school-boy teams lead the way.  Things are on the up though with the two clubs filling the top two positions on the ?C? Section ladder and the Rovers undefeated.

The peak of the rivalry for the Hampton Rovers was in 1951 when the club won its first and only ?A? Section flag with a 5 point win over Ormond with the last kick of the day.  With that win, the Rovers were the first club in the league to win premierships in all four grades.

Fast forward some 57 years and we look forward to a blockbuster clash between these two great clubs of the VAFA.  A bumper crowd is expected at the David Street ground for the game.  The pre-game Luncheon is already sold out with all 150 seats booked one week ahead of the match.  It will feature AFL/VFL legend David Parkin, Hampton Rovers own Brownlow Medallist and former St Kilda/Victorian captain Ross Smith, and Collingwood coach Mick Malthouse as guest speakers.

Meanwhile, former Ormond player, now plying his trade in the AFL at Richmond, Will Thurstfield, will toss the coin while the Australian National Anthem will also be played prior to the game.  Melbournes Nathan Carroll be involved with the Auskick earlier in the day, there will also be Auskick at half time of the seniors.

Both clubs will be playing for the Buxton Cup, which last went to Ormond when the two teams last met in 2006.  The home team will be wearing special one-off heritage jumpers for the big clash.

The big day will wrap up with the 1998 Premiership 10 Year Reunion Dinner, celebrating the against-the-odds ?C? Section Grand Final win against Beaumaris a decade ago, with around 100 people expected.  The Rovers premiership coach that day, Russell Barnes, of course is now in charge of Saturdays opponents.

Supporters wishing to see VAFA district football at its best are encouraged to come along to Boss James Reserve, cnr David St and Bluff Rd Hampton, for whats being promoted as one of the biggest home games ever at the ground and promises to be a great day of football and other festivities celebrating 150 years of our wonderful game.

Other ?C? Section games this Saturday are Mazenod v Whitefriars, Monash v Ajax, Parkdale v Oakleigh and MHSOB v Rupertswood. With no AFL on this weekend, all football followers are encouraged to get down to a local game.