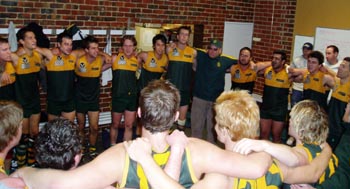 The local derby was a low scoring affair however both teams produced some good footy for the large crowd. It was a tight tussle with neither team able to kick away until the final quarter.

At the first break, the Rovers held a 2 point advantage. Amazingly the second quarter failed to produce a goal however the third was slightly more entertaining with the Rovers taking a slight lead into the last term.

Ormond managed the first major of the last quarter however it was all Hampton Rovers from thereon. The confidence of the green and golds was clearly evident as they managed a few goals to seal the game and defeat Ormond 10.10.70 to 8.9.57.

The win leaves the Rovers in 7th position on the C Section ladder however with no fewer than 5 teams on the same number of points, it could also be said the Rovers are equal 3rd.

Best for the Rovers were Nick Greenwood, Nick Henry and Gerrard Woods while also lead the goalkicking with 3 with Gary Carr the other multiple goalkicker with 2.

Meanwhile the Under 19s broke through for their first win of the season defeating Powerhouse/Sth Mornington by 29 points. Best for were Lee Smith, Jackson Ward and Tom Mitchell. Rory White booted 5 goals with Lyall 3 and 2 each to Morecroft and Ward.