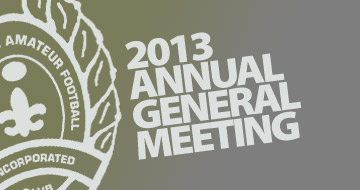 The 2013 Hampton Rovers AGM was held on Monday evening at Boss James Reserve to wrap up a successful year for the club.

About 35 members were in attendance and they heard reports from the chairman, senior and junior president’s and treasurer. The club traded in the black and sits in a healthy financial position.

The 2013 Annual Report is now available for download which includes a full wrap of the 2013 season – 59 pages in total, including reports from the senior and junior president’s, season reports and award winners from all 22 teams and career stats for all 542 players who wore the green & gold in 2013.

The club thanks everyone for their support in 2013 in what was a most-successful year, culminating in the first senior premiership for the club since 2001. 2014 promises to be bigger and better than ever and we look forward to seeing everyone back at the Rovers!