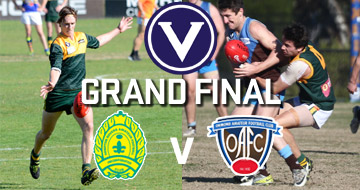 Hampton Rovers takes on local arch-rivals Ormond in the 2013 VAFA D1 Grand Final this Saturday at Trevor Barker Oval in Sandringham, commencing at 2:15pm. We encourage everyone to get along and show their support in what is a massive day for the club.

The Rovers will be looking to claim their first senior premiership since 2001 and will go into the game as favourites but know it will be no easy task against a formidable opponent.

The club is encouraging everyone from the seniors, juniors and local community to wear green & gold and get along to the Sandringham VFL ground. The Rovers will again be in the home rooms  in the grandstand at the southern end. We encourage all supporters to congregate on the hill between the bench and grandstand and behind the goals at the southern end.

Entry is $12 for adults, $6 for concession, and free for children U12 & pensioners. We will have Rovers scarves for sale inside the ground at the special Grand Final price of just $20.

Hampton has enjoyed the week off after defeating Williamstown in the second semi by 39 points. The players had a light training session at Trevor Barker Oval last Saturday before watching Ormond defeat Williamstown by 11 points to earn their spot in the season decider.

During the season, the Rovers defeated Ormond on both occasions with a first-up victory at Boss James Reserve by 23 points and a hard-fought 17-point victory at EE Gunn Reserve in round 10.

Training has been sharp all week with positions in the Grand Final team at a premium. Big numbers were in attendance at the club Thursday evening to hear the announcement of the team. Unfortunately only 22 players can be selected and there were a number of unlucky players to miss out. Senior coach Guy Martyn has selected a strong side and its now up to them to get the job done in the biggest game of the year.

The excitement at the club has been building and we look forward to seeing everyone at Trevor Barker Oval on Saturday! Get to know the players better before Saturday  see the updated player profiles on the website here.

The Hampton Rovers website and social media channels has the Grand Final covered:

We would also like to see supporters posting on social media. Use the hashtag #gorovers

Following the game, we welcome everyone back to Boss James Reserve for the Grand Final Party. We also welcome all supporters back on Sunday where there will be an acoustic band in the afternoon.

To get the Grand Final weekend started, everyone is invited to the Hampton Rovers Grand Final Eve Function, commencing from 6pm Friday evening at Boss James Reserve. Guest speaker is Chip Le Grand  1995 Rovers premiership captain, league B&F, and current Victorian editor and senior sports/politics journalist at The Australian newspaper. Bar open, finger food provided, the footy on tv and a bit of music. A casual evening to get a big weekend started! Click Here for full details.

Dont forget to book your seat for the 2013 Presentation Night  to be held on AFL Grand Final eve (Friday 27th September) at the Sandringham Football Club. Tickets are $55 each and can be purchased online  click here. Or see Cameron Voss at the club Friday evening.