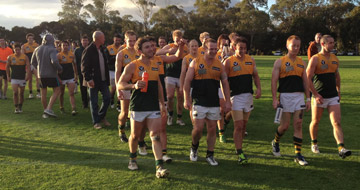 Hampton Rovers recovered from a shaky start to defeat Old Mentonians by 53 points at Keysborough on Saturday to continue their undefeated start to the season.

The Rovers already had several players missing and Anton Duddy was a late withdrawal due to sickness. Tyson Woodland was a late call-up to make his senior debut. It was always going to be interesting to see how the boys would perform after last weeks 31-goal victory, up against a side who would provide more much of a test.

The opening stages had a Rovers faithful, who had again travelled in good numbers, feeling a little worried. Nothing was going right for the green & gold and while both sides had the same number of scoring shots, it was the home side that kicked three goals to lead the goalless Rovers by 15 points at quarter time.

The start to the second term was no better as Old Mentonians kicked truly early on and their lead increased to 23 points. It wasnt until the ten minute mark of the quarter that Hampton kicked their first goal of the day. That sparked the Rovers and from there it all clicked. A further four unanswered goals gave Hampton a ten point lead at half time.

Hampton applied outstanding pressure all over the ground and turned the home side off their game plan. The great footy we had seen in the opening five rounds was there for all to see in the second half as the Rovers went on a rampage.

Two goals in the opening minute and a bit was a sign of Hamptons dominance. A further four majors increased the lead to 41 points at three-quarter time and five goal to two final term boosted the Rovers winning margin to 53.

Danny Corp who came back after a week off finished the game with five goals  all in the second half, while Jason McCoy and Sam Clements both kicked three. Jason Zampaglions, Kyle Pinto and Stuey Burggraaff were best for the Rovers.

It was an impressive response by all the players following the slow start and will no doubt provide some valuable lessons for the remainder of the season. The win leaves the Rovers two games clear on top of the ladder  undefeated on six wins, with a top-of-the-table clash against second-placed Whitefriars next week away at Donvale.

The Reserves suffered their first defeat of the season, going down by six points. It was an experienced line-up with Steve Anderson, Adam Power, Michael Fletcher and Brenton Holt all taking to the field. Power kicked three goals and Fletcher two, while Rick Jones, Steve Anderson and Liam Woodland were best.

The Under 19s put in a good performance but went down by ten points to De La Salle in an entertaining game at Boss James Reserve. Matt Care kicked four goals with three to both Sam Care and Tim Jones. Best for the Rovers were Campbell Jones, Tim Jones and Matt Care.

The Thirds suffered a heavy defeat to undefeated Hawthorn. Steve Helliger wound back the years and was best for the Rovers, along with Garry Giasoumi and Kyal McNeil. Leon McCarthy, Helliger and Nath Foster kicked the goals.