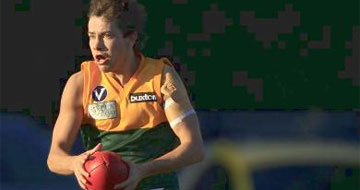 The saying goes when it rains, it pours and this is certainly the case when describing the Hampton Rovers recruiting success in the lead up to the 2013 season.

On the back of Daniel Corp and Stuart Burggraaff signing, further good news has come to hand with the club able to confirm that former Hampton Rover Kyle Pinto committing to return to the club he loves, for season 2013 and beyond.

A favourite son, Pinto first pulled on the green and gold jumper in 1996. Since then he has represented the club on 197 occasions. In 2007, as Captain of the Under 19s, he won the I.A. Brown Medal for the Best and Fairest player in the Under 19 South competition, having come 3rd in the award in 2006.

Pinto last played for the Roves in 2010, having spent time travelling overseas, winning an AFL Canada premiership with the Central Blues in Toronto alongside fellow Rovers Corp and Daniel Andersen, as well as his brother Nick Pinto.

In 2011 and 2012, Pinto played with the Hasting Football Club in the Mornington Peninsula Nepean Football League.

Light on his feet and dashing pace, Pinto will be a welcome addition to the Rovers side, most likely taking ownership of the members side wing.

With pre-season training now underway, 2013 is shaping to be one of the most anticipated seasons in the clubs history. Now is the time to jump on board!