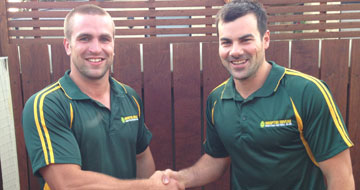 Following the news that Daniel Corp has committed to returning to the Hampton Rovers in 2013, the club is also able to confirm that former player Stuart Burggraaff has committed to play in 2013 and beyond.

Burggraaff first joined the Rovers in 2000, and was a solid contributor for 12 years. He has played 201 games for the Rovers including the 2007 and 2008 senior Grand Finals.

With a number of close ties to the club, Burggraaff is delighted to be back home.

You play footy for a number of reasons, and playing with your mates and winning premierships are certainly two of those reasons. Megan and I have a heap of close friends at the club, and given the recent appointments at the club, I think on-field success is not too far away, so we are both super excited about coming back and getting involved. Burggraaff said following his decision.

In 2012, Burggraaff played with Tarwin Lower in the Alberton Football League. His experience and professional approach to football will be invaluable with a young and enthusiastic list.