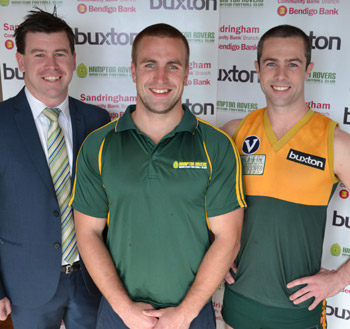 The Hampton Rovers Football Club is absolutely thrilled to announce Guy Martyn as senior coach for the 2013 season and beyond.

Martyn, 26, has taken on the role as a non-playing coach and will be well supported by the highly regarded Owen Lalor, who has been appointed assistant coach.

Martyn has a long and proud history with the Hampton Rovers, the club he first joined in 2001 as a junior player  winning multiple club and league awards. He remained an active supporter of the club during his time with the Sandringham Dragons in the TAC Cup and the Sandringham Zebras in the VFL, before returning to the Rovers as a player in 2009 through to 2011.

In 2012 he played on the Mornington Peninsula, before a series of debilitating soft tissue injuries severely restricted him, prematurely ending his playing career.

Martyn has proven leadership qualities, captaining East Sandringham Boys Cricket Club to the 2011/2012 Longmuir Shield in the CMCA while he has also assisted on the sidelines while injured at the Rovers.

Owen Lalor has successfully led both St. Bedes Mentone and Old Melbournians Under 19 teams to premierships, as well as guiding St. Bedes Mentones senior team to the 2011 A Section Grand Final. More recently, Lalor was appointed coach of the VAFA Under 19 representative team which has just returned from a tour of New Zealand while he has also previously been named VAFA Under 19 Coach of the Year for two consecutive years.

With Martyns youth, enthusiasm, football knowledge and his profession as a school teacher at St Bedes College, combined with Lalors rich experience and history of success, the future of the Hampton Rovers is extremely bright.

The appointments mark an exciting new era for the Hampton Rovers Football Club, which will also see Matthew Gray instated as new senior president of the club.

We are absolutely ecstatic about the appointment. The club has struggled on the field over recent seasons, but with such an appointment we are extremely confident things will turn around immediately, and we will see Hampton Rovers surging up the grades, back where we belong, incoming president Matthew Gray said.

We are already in talks with numerous players, and we are confident we will inject a number of quality senior players with experience to our playing list which will complement our exciting young crop of current players.

Hampton Rovers has always been my home and Im absolutely wrapt to be back, new senior coach Guy Martyn said following his appointment.

Its a huge honour to be appointed senior coach and lead the club into a new era. We have a lot of very exciting things in the pipeline for the new season, and I just cant wait for the pre-season to kick off.

Works are planned for the clubs rooms over the off-season in readiness for the 2013 season, which is on the back of the recent resurfacing of Boss James Reserve  with the club now boasting arguably the best playing surface outside the AFL.

Details of the pre-season program are currently being finalised and will be available on the Hampton Rovers website soon.