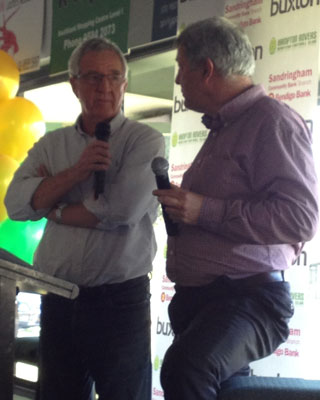 The 2012 Domino Luncheon was a huge success for the Hampton Rovers Football Club with a record 140 people in attendance enjoying an entertaining day including guest speaker Mike Sheahan.

For the first time, the annual lunch was moved from The Sandringham Club to cater for an increased attendance after the event sold out in record time. Boss James Reserve was the venue on Friday and a great day was had by all in attendance. Gone was the view of the tennis courts and in was a view of one of the best playing surfaces in Melbourne.

While exact figures arent known just yet, a significant amount would have been raised for the club. The food was five-star thanks to our resident caterer Tim.

Thanks to everyone involved who made it such a great day, especially to Don Scarlett who organises the event year after year, also to everyone who chipped in to make the event happen so smoothly at the club and of course to our wonderful guest speaker Mike Sheahan who was superb.

The Domino Lunch will be back bigger and better in 2013 so make sure you get amongst it!