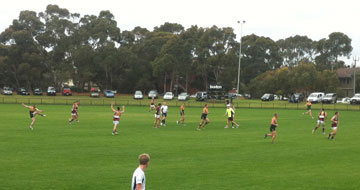 Hampton Rovers miserable season continued on Saturday, with a heavy loss at the hands of second-placed Marcellin at Boss James Reserve.

The day got underway with another strong attendance at the pre-game Lunch with over 70 people enjoying a quality meal, guest speaker Robbie Ahmat and info about the younger players currently playing Seniors with the Rovers, being the Future Stars Luncheon.

Unfortunately that injection of youth from Sandringham Dragons failed to have an overall positive impact on the scoreboard, however the Rovers play better than previous weeks. The senior side had some 11 changes from the previous week.

Karl Amon kicked the Rovers only three goals in his senior debut. Leigh Fletcher was again best for the home side and was supported by Sam Clements, Zac Pirrie, Adam Power, Tom Youl and Karl Amon.

Next week the Rovers take on ninth-placed Mazenod at Central Reserve.

The Under 19s kicked their biggest score of the season but went down to St Marys Salesian. Down by 22 points at the final break, the Rovers could only manage two goals to the oppositions eight in the final term. Bryce Pewtress and Mario Papotto kicked three goals each. Jay Dillon, James Massey and Jack Zaina were best for the Rovers.