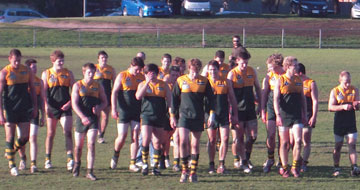 It was a tough season in 2011 with the senior side playing fifty players. Seventeen of these were debutants.

After an exciting start to the season drawing our first game against St Kevins, we were unable to field anything like our strongest side due to injury and unavailability until Round 12. Whilst the last third of the season saw us being more competitive winning two games, our performances over the course of the season saw us finish on the bottom of the ladder and therefore relegated to Premier C for 2012.

At first glance, this would appear disastrous, however if we scratch a little bit beneath the surface there are some extremely positive signs that the Club is heading in the right direction.

The opportunity to blood so many young players at senior level and for them all to perform so creditably will go a long way as the club strives hard for genuine success in 2012.

The most important thing we need to do is STICK TOGETHER. The one underlying element about all successful eras in Amateur football is that the playing group stays together. The players showed that if they stick together and remain POSITVE they can match it with the best sides in the competition (Round 17 v premiers Caulfield Grammarians, win by 69 points)

I would like to congratulate the trophy winners for 2011 in particular:

Best and Fairest (Bob Cave Medal) Leigh Fletcher. Leigh had a terrific year and was thoroughly deserving of the honour showing great courage to play the last six games with broken ribs.

Thank you to the following people:

All players must realise that THE COMMITMENT LEVEL to be successful must improve across the board. To Jude, Jane, Michael and John, love you guys and couldnt do it with out you.

In closing, I would like to thank everybody involved at the club for your support and friendship.