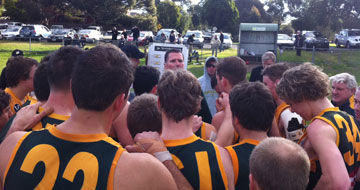 Despite finishing the stronger, Hampton Rovers were fell short by seven points against Marcellin at Boss James Reserve on Saturday.

After last weeks great win over Beaumaris, the Rovers looked flat going into Saturdays Round 15 contest. The Rovers fielded an even stronger side on paper but that didnt translate to an improved performance, in what was a uninspiring game of footy between two sides destined for relegation.

With nothing but pride on the line, it was Marcellin who came out stronger, kicking four goals to one in the first term. The Rovers lost Daniel Corp early on with a nasty cut to the head requiring stitches and the home side was down to 21 players for the remainder of the game.

The second term was a close contest, with both sides kicking two majors each, but despite going into the game as favourites for the first time this season, the Rovers looked a vastly different side to the previous week, failing to hold possession and control the footy.

The third stanza saw the visitors outscore the Rovers again  four goals to three. It wasnt until the final term that the Rovers switched on and applied pressure to the scoreboard. The margin at the final break was 24 points.

Guy Martyn kicked one early to bring the Rovers right back into the game. The home side controlled the footy in the final term but missed several opportunities. The Rovers went on to kick four goals in the final term to Marcellins two and despite playing the better footy, ran out of time as the final siren blew, resulting in a seven-point win to Marcellin.

This week the Rovers travel to Essendon to take on St Bernards before returning to Boss James Reserve Saturday-week for the final home game of the season against Caulfield Grammarians.

Also on Saturday, the Reserves were defeated by Marcellin. After being down by only a few goals at the final break, it was the visitors who dominated in the last term, kicking ten goals to one.  Liam Woodland kicked three, best were Alex Ross, Daniel Andersen and Matt Powell.

The Under 19s were overpowered by a strong Old Trinity outfit. Best players were Josh Pavlou, Nick Taylor and Matt Care. The 19s play their final game of the season this Saturday at Boss James Reserve with the final round a bye for them. The Thirds season finished last week.

Saturday was the final game for our contingent of Canadians who have been playing with us this year: Mike Karas, Victor Cinco, Arnold Quirong and Earl Monero who was only able to play his first game on the weekend just gone. Its been a pleasure having the players on board this year and we wish them, as well as coach Jaye Macumber, all the best in the upcoming International Cup  the Rovers website will keep you updated on the latest with the Canadian team.