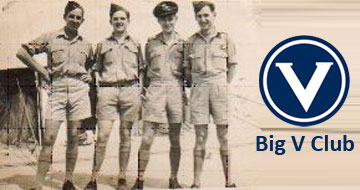 A World War II prisoner of war, Sam Birtles from Hampton Rovers, was posthumously made a VAFA Big V Champion on Friday.

Birtless daughter Ann Vandenberg recalled on Friday how her father was a navigator who crashed in Germany. After the war he returned to the site and by luck a local spotted Birtles trying to find the crash spot.

He invited Birtles back to his home where he had part of the planes broken propeller.

After playing in the 1940s and 50s Birtles umpired for the VAFA. (In the above photo, Sam is second from the left)

Dave Hughes from Old Scotch and Peter Slattery from Old Xaverians, Big V teammates from the 1960s, were also inducted. It has been a steller year for Hughes, who chairs the VAFA tribunal, as he was made a VAFA life member in April.

From the VAFA Amateur Footballer
One of the great stars in the early post-way years. Shot down and captured in WWII, he returned after the way to win a Woodrow Medal in 1949 and serve his club and state with great distinction. He played for the Big V in 1947, 1949, 1950 & 1952, the last year serving as captain. He was All-Australian in 1950 and 1951. After returing, Sam umpired in the VAFA, and also coached at club and state level. In later life, Sam lost a leg and later the other as a result of diabetes brought on by his time in the POW camp. Despite these setbacks, he continued for some time to play golf at Victoria.